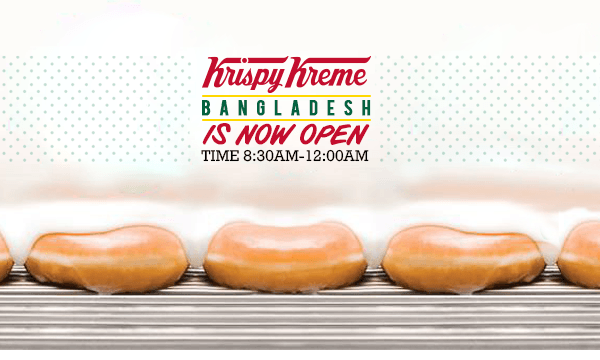 Its first customer won a year’s supply of doughnuts.

Krispy Kreme has down expanded its presence to 26 countries around the globe, as it recently debuted in Dhaka.

According to the company’s media release, Krispy Kreme inked a franchise agreement with Orion Group in 2014 to roll out 20 shops throughout Bangladesh over the next five years.

The two-storey shop is roughly 5,000 sqft, and features over a dozen of Krispy Kreme’s flavours. The shop’s first customer at the grand opening won a voucher for a free doseon of Original Glazed doughnuts each week for a year.

“We are thrilled to share the joy that is Krispy Kreme with our strong fan-base in Dhaka and all of Bangladesh,” said Dan Beem, Krispy Kreme Doughnuts’ Senior Vice President and President – International.

“As our partner continues to open shops over the next several years, we expect to build upon that robust foundation by making our sweet treats and premium coffee the new favorite throughout the country.”