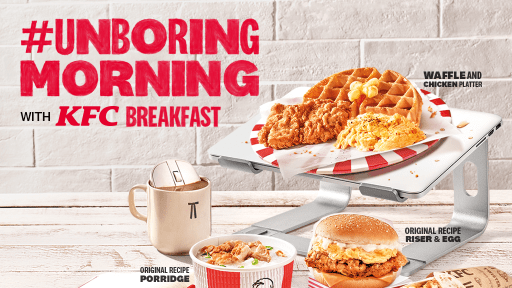 The chain has been seeing success in introducing new items for the daypart.

KFC Singapore is eyeing a bigger bite of breakfast sales over the next three years.

Recognising the “untapped” potential of the dining occasion, KFC said its team have committed to increasing their advertising and promotional budget by four times, alongside a relaunch of their signature Original Recipe breakfast.

The fast food chain recently launched its #UnboringMorning campaign to support its plan, featuring a convoy of KFC-branded sidecars made their way through the rush hour traffic to their Kallang restaurant.

The move also comes in the wake of the introduction of fresh waffles to the breakfast menu in April last year, which resulted in a double digit increase in breakfast sales. The team will also add the Mushroom Original Recipe Twister and new and improved Original Recipe Riser & Egg as permanent fixtures to the menu from February 8.

As part of the #UnboringMorning campaign, KFC Singapore have also launched a series of deals, and will be launching a social media competition, which will see five commuters win a ride to work in a sidecar.

“The KFC Singapore breakfast items refresh, and marketing push, are strategic business decisions to drive increased revenue in the A.M. slot. We know that Singaporeans simply love our fresh chicken and Original Recipe flavour, and we encourage them to satisfy their cravings by experiencing #UnboringMornings with KFC Singapore. Why wait till lunch?” Lynette Lee, general manager of KFC Singapore, said.