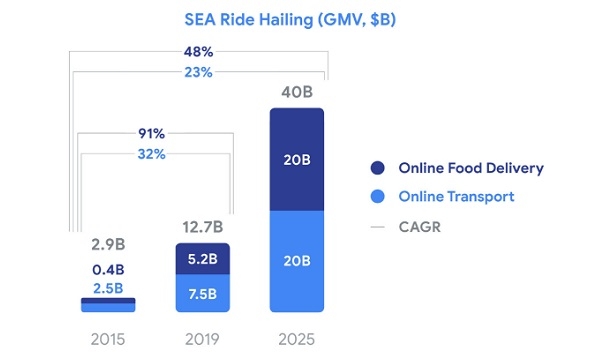 It has more than doubled in 2019 alone compared to the previous year.

According to this year’s edition of the e-Conomy Southeast Asia report released by Google, Singaporean sovereign wealth fund Temasek and global consultancy firm Bain & Company, queries for online food delivery brands have grown more than 13 times in Indonesia, nine times in the Philippines and eight times in Thailand over the last four years.

Food Delivery gross market value, which was US$400m in 2015, has surged by almost 15 times in just four years.

The study lumped online food delivery with the ride-hailing sector, citing players such as Grab and Gojek that started as transportation alternatives who are now competing with specialised third-party aggregators Foodpanda and Deliveroo.

Combining it with food delivery, the consolidated sector’s 2025 potential exceeds US$40 billion, up from US$29 billion predicted previously. This means that food delivery is projected to be as large as the ride-hailing sector by that year.

“[C]onsumers are relying on Food Delivery services for meals they would otherwise have to cook at home or buy from food vendors. For an emerging and increasingly time-conscious middle class, the convenience of having piping hot food delivered to one’s doorstep is highly valued. Such consumer behavior has become the norm, particularly among dual-income families,” the report explained.

Food delivery is understood to have “undergone a fundamental shift” in consumer behavior since 2018.

“From a niche service that was used only occasionally by a small group of users, it has become common for busy professionals and families alike to order food online for everyday meals and special occasions. By sparing consumers the inconveniences of humid weather and traffic jams, Food Delivery has become particularly popular in Metro areas,” it said.

The use of promo codes and ubiquitous marketing campaigns also played a key role in convincing users to try out such services.

“But increasingly, the wide variety of cuisine options available — including affordable meals from food court and street food stalls — the enticing user interfaces and speedy deliveries have become the determining factors behind recurring usage,” it added.

Currently at US100m, the study predicts that the Internet economy will triple its size by 2025.